WE Innovate: The global economy is accelerating rapidly and local employers need to join it 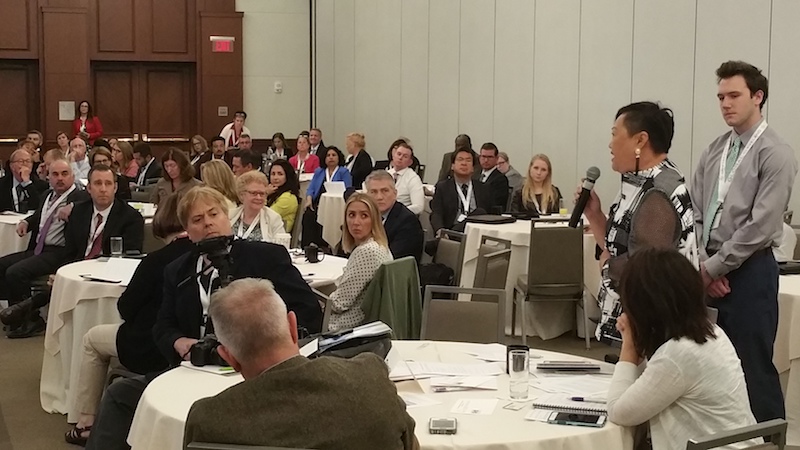 The global economy is accelerating rapidly and local employers need to join it. That means targeting global markets and hiring the kind of talent that can succeed in new worlds.

That means becoming a global employer.

Those were key messages to emerge at the inaugural Global Employer Summit, which Global Cleveland hosted May 31. The first-of-its-kind conference drew about 150 business leaders, educators and international students. They discussed new business frontiers, missed opportunities, and strategies for making local companies more competitive in the global economy.

“I think we’re in a very interesting time,” said Robert Horsley, executive director of Fragomen, an immigration law firm with a global practice. “The world is globalizing rapidly. I don’t think global hiring is just for the big companies anymore.”

He said small and medium-sized companies need to begin to take advantage of international talent, which may require learning the visa system and developing some cultural competencies. Horsley noted companies in Cleveland’s peer cities, like Pittsburgh, now routinely hire internationally to fill jobs in high technology.

Scott Chmielowicz, the senior director of global mobility and human resources at Cleveland Clinic, reinforced that message in an afternoon panel discussion. He said the clinic became a world-class hospital system by becoming a global employer.

“We’re taking the best of the best internationally. We’re bringing some great international talent to Cleveland through H-1B visas,” he said, referring to visa program for immigrants with special skills.

A sobering backdrop to the summit was a recent study by Team NEO, the regional business attraction agency. Its research revealed a mismatch between local job openings and the local skillset. Not enough local residents possess the skills needed by area employers.

Jacob Duritsky, the vice president of strategy and research at Team NEO, told his audience the regional economy will not realize its potential until the skills gap is narrowed. He also pointed to a ready resource—the 7,000 international students studying at area universities.  Many of those students are earning degrees in science, engineering and technology, his research found. Their in-demand skills could help local employers to compete and grow, creating more jobs for everyone.

“That means that international students are well-positioned for job opportunities here,” he said.  However, hiring them might require a change in attitudes.  Many international students, including several who attended the summit, say they are ignored by local employers, and so they must look elsewhere to launch careers in America.

Why host a summit?

Global Cleveland launched “Global Employer” programming in the fall of 2015 with the aim of engaging employers in the conversation of international talent hiring and retention as a means for local economic development.  Through engagement with more than 100 business leaders, recruiters, and human resources professionals, the vast majority stated they either screened candidates by asking about visa status or were not interested in recruiting international talent.

After a series of smaller scale roundtables and other events, Global Cleveland decided to host a large scale convening of employer partners to address frequently asked questions and provide an opportunity for employers to learn more about the realities of immigration.

The Global Employer program includes a menu of services for employers who are looking for solutions to problems or ways to successfully start recruiting and engaging with international talent. The Global Employer Summit became a conference for those global employer partners to share their successes, other community partner organizations to share their resources, and the US chamber to provide policy updates for what employers and business leaders can expect in the current administration.

The evolution of this idea was started to create a platform for these messages and to create connections – as well as to start an annual convening that addresses the business side of immigration. There was tremendous support in hosting this event again next year, and to continue developing these conversations.

Sowmya Bhamidi came to the summit with a new master’s degree in digital sciences from Kent State University. She is seeking work in the growing field of data science. As a high-skill immigrant, Bhamidi can work up to three years before needing an employer to sponsor a work visa. Yet she has so far found her immigration status to be a deal breaker in Northeast Ohio.

“I say, ‘You’ll have three years to decide if I’m worth it,” she said cheerfully.

She shook her head.

“They’re very nice. They tell me I’m highly qualified. I never hear back.”

An opportunity to shed light on misinformation

Andy Passen thinks she is running up against a harmful mindset. The former director of human resources for Forest City Enterprise says many local employers are either unaware of the visa process or are intimidated by it, especially in the current political climate. That’s one reason he pushed for an employer summit. He saw a need to educate employers on the relative ease of hiring international talent.

“It’s the start of a dialogue that I hope will lead to action,” he said near the close of the daylong conference. “We need to bring more business leaders into the discussion. I think there’s a lot of misinformation.”

Global Cleveland has not yet decided if there will be a second Global Employer Summit, but Passen’s mind is made up.

What we’ve learned so far

When serving highly skilled refugees, you don’t need to re-invent the whe...
Scroll to top