As an increasing number of Rust Belt communities realize the enormous contributions that immigrants make to local economic growth and prosperity, new and innovative economic development initiatives are being launched to build more inclusive and welcoming economies. These initiatives often include a number of programs that facilitate immigrant entrepreneurship, talent inclusion, welcoming work, and other elements.  As rapid as these local programmatic initiatives are being launched, innovations also are being pursued by state and local public policymakers.

Thus, the Welcoming Economies Global Network has launched Ideas that Innovate to create a collection of state and local public policies that further our efforts to pursue immigrant economic development strategies.  Explore the full collection of ideas here. 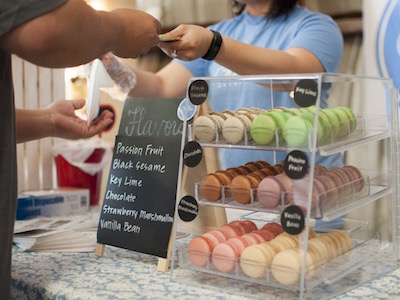 Cities across America offer a wide array of business grants, subsidized loans, and other incentives to support entrepreneurs, especially in distressed or developing urban neighborhoods. Too often, however, these grant and incentive programs do not connect with immigrant and ethnic business owners, many of whom have thriving businesses that are ideally situated to help achieve the goals of these programs. Immigrant and minority business owners may be unaware of these incentive programs, mistakenly assume that they are unqualified or not wanted for these programs, face linguistic barriers that make even applying to these programs challenging, or confront other cultural barriers that need to be navigated.

A small stipend provided to a “connector” agency can help remove these barriers. Local economic development efforts can help reach immigrant business owners and enhance the impact of their business grant and incentive programs. Using this method, the Detroit Economic Growth Corporation (DEGC) has helped make significant inroads in increasing the number and quality of immigrant and ethnic business applications for small business expansion and property revitalization grants.

In 2015, the DEGC provided Global Detroit approximately $5,000 to aggressively market, promote, and assist two business grant programs—the NEIdeas business expansion grant program and the Motor City Match property rehab incentive grants—to immigrant and ethnic business owners in a targeted Hispanic/ Latino community. During the grant period, minority applications for the NEIdeas program from the targeted Hispanic/Latino zip code grew 350 percent (while citywide applications and minority applications citywide fell 10 percent) and 25 percent of the spring 2016 round of Motor City Match winners were immigrant business owners (in a city that is 5 percent foreign born). A similar grant was made in 2016 to build upon this success and expand it to Bangladeshi and Arab business owners.

Global Detroit used the money to hire, train, and deploy bilingual engagement specialists in the targeted zip code. These workers canvassed the local business strip, visiting the stores of local businesses and talking to as many business owners as possible. They attended a variety of community events and meetings at churches, schools, and other places where immigrants frequented. While these visits included discussions of the NEIdeas and Motor City Match grant programs, engagement specialists sought to build longer-term relationships with local business owners and to identify as many resources as possible to assist the owners with their business success. Through this process, in 2015 the engagement specialists developed a database of 140 active business owners in the targeted zip code with whom Global Detroit and DEGC can continue to work to promote other opportunities.

Many cities, nonprofit community development initiatives, placemaking efforts, and economic development programs focus on encouraging new retail and Main Street businesses in targeted neighborhoods. Such programs often offer capital and tax incentives, technical assistance, planning and other enticements to persuade business owners to locate or expand into these communities. Yet, too often the incentive programs do not connect with an important segment of the potential users of such services—immigrant business owners.

Successful immigrant entrepreneurship programs are often characterized by their linguistic and cultural competence. Simply translating brochures or hiring bilingual speakers—while important steps in the right direction—often cannot overcome deeper barriers that can exist between program design and immigrant and ethnic business owners. For example, requiring immigrant and ethnic retailers to attend community meetings to learn about programs, instead of marketing such programs directly to the owners at their place of business, can vastly limit participation.

Many economic development agencies, chambers of commerce, and local governments simply do not have the staff resources to invest in what can be an intense effort to build trust and connectivity with small immigrant and ethnic business owners and their communities. By providing resources to partners who have established themselves as trusted advocates and partners within those communities, government and economic development agencies can leverage their incentive programs with the growing and ambitious ethnic and immigrant business communities who have too often been disconnected from such opportunities.

BDC Internships: Breaking Down the Barriers to Refugee Employment
Scroll to top